It is okay to make mistakes. It’s okay to change your mind. If you can afford it, call in a pro. Or, like us, make your progress in baby steps, with a lot of head scratching and shuffling things around in between!

Over 20 years, as our tree canopy grew, I lost most of my flower garden, forcing me (my husband) to either cut down trees or (me) adapt to shade gardening. For the most part, I did the latter. The vast majority of my back yard is covered by a tree canopy of evergreens, conifers, and deciduous trees. On the positive side, many of my hydrangeas thrive. On the downside, my sun-loving perennials and annuals did not.

Years ago, we converted a sunny dog area, which was free from any vegetation into a raised bed area. That made sense. My husband decided he wanted to grow vegetables and we built six raised beds constructed out of concrete blocks. Functionally, it worked, but after the second year, the blocks shifted, the weeds found their way in, as did the groundhogs. Next year we had a haphazard chicken wire fence to protect treasured veggies from being consumed, but that addition prevented us from easily weeding.

In short, the area became a food-producing eyesore. All viewable from my living room window. I hated it and I wanted it all out. After years of nagging, and a compromise to consider growing some veggies in elevated trugs, I won my way and we tore out and sold off the concrete blocks. If we had built the raised beds correctly, they would still be where they are. But that’s another story!

By now I had really begun to pay attention to the lectures and workshops provided by Cooperative Extension. Extension agents, Master Gardeners, authors like our own UD professor Doug Tallamy, all emphasized the importance of developing areas for pollinators.

This side area area gets full sun. To the left of the above picture you can see two remaining raised beds which were removed in 2019. All this block was removed and the good soil contained inside was spread to the right of the paths.

Before we took down the raised beds, we experimented with a more permanent path leading from the side garage door into the main back yard. In the top left, two sections of split rail remained where a compost bin used to be. I was starting to experiment with pollinator plants.

We ditched the idea of the tightly fitted stone pathway, and moved them to the side, seen below on the right. This created a mulched foot path, but very unstable edging, a nightmare for navigating a hose. This area has no underground irrigation.

We decided we did not like the stones on the side of the path. They moved and I could not move the hose around easily. I began to research stone and gravel paths.

These stones were heavy! Both my husband and I are officially “seniors” and I keep forgetting I am not 30 or 40! Three days later my right hand was almost totally immobilized. We knew how to bend our knees to lift heavy stones, but I did not pay attention to my hands. I should have worn hand braces. I did afterwards! It took me a month for my right hand to heal.

We do not have an irrigation system on our property. Dragging a hose around is not fun! The green tripod, which a friend sold to me – an extra one she bought from Lowes, was a godsend. I’ve since bought another. I got rid of my heavy hoses and bought two of those lightweight, collapsible types to hook up to the tripod. Most, not all of the new plants in this area are native.

We also decided to take down our 21-year old split rail fence. It was coming down on its own anyway.

The area behind the bench (pictured above) still needs rehabilitating. We planted a redbud tree, not quite large enough to cast some shade over the bench. Behind it, a very sunny spot will be an area devoted to milkweed and taller native plants.

In the past two years, we redefined our large back yard into separate areas. Our pond, which we downsized, is the centerpiece of our no-mow, no-lawn back yard. Facing the pond to the right is our evolving deep shade garden, with a tent-type gazebo. To the left, our sunny pollinator garden. It is a rustic and wild-life friendly oasis. In the future, we plan to thin out some non-native trees and plant some red oaks and other native trees.

Among other things, my goal with this garden is to eliminate plastic and resin and stick to stone, wood and ceramic objects – natural as possible elements to contribute to a serene environment for humans and critters alike.

This is the most gorgeous walkway I have ever seen. I saw it in my Facebook Newsfeed, posted by the Raw for Beauty page. It has a Sixties feel, don’t you think? Yet, it looks contemporary too! It’s a work of art!

I have to figure out a way to get this done! Love the colors, the floral bursts and spirals. It probably would cost a fortune, but I am going to try begin to collect and stow away materials that could be used later. Definitely worth getting some estimates for having it done. Simply stunning! Any landscapers out there need website or social media services? I am willing to barter! 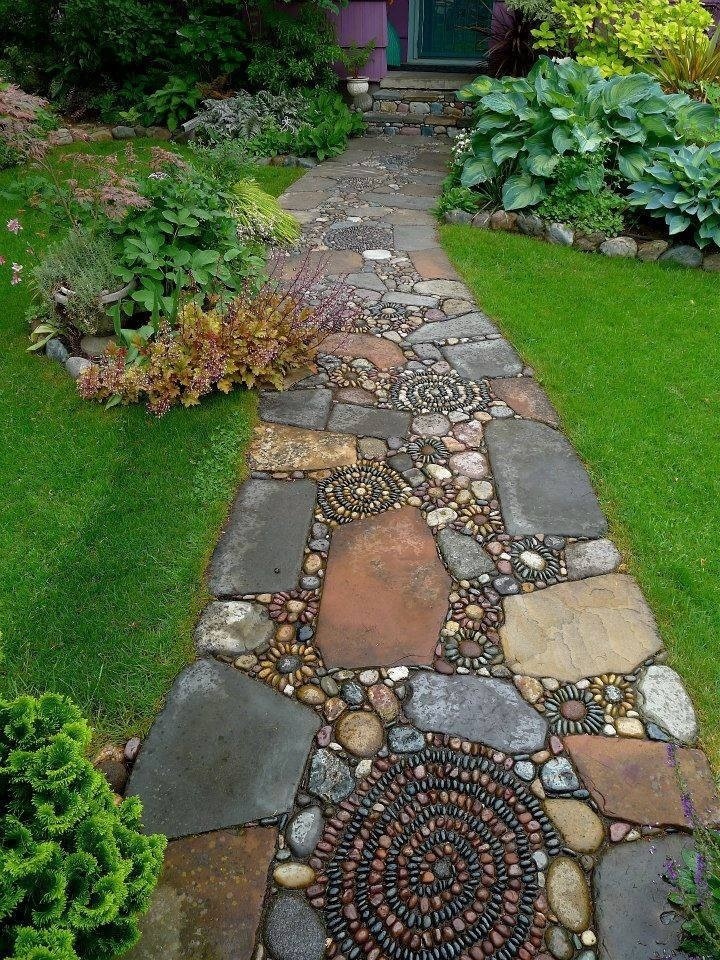 View all my garden photos!